Kalymnos is the exotic dream destination of all the climbers.

One week to sail around the island and to climb on many renowned crags while experiencing the true, wild and uncontaminated Greece. Wake-up and dive from the boat! Than sip a hot coffee under the morning sun while preparing the back-pack for the day...than climb, swim, sail and repeat, making sure not to loose the daily aperitif by the amazing Kalymnos’ sunset. 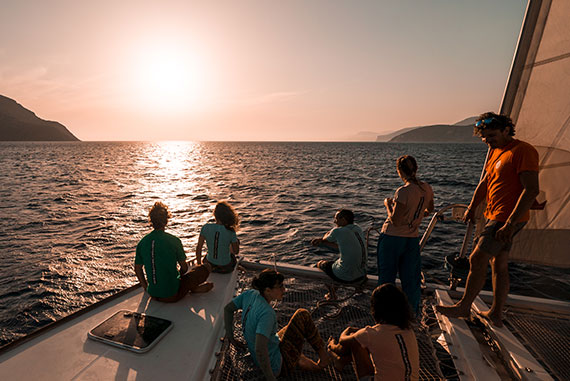 The island became famous after the “The North Face Kalymnos climbing festival” and since than, climbers from all over the world have come here to climb on its perfect limestone. The rock is truly superb and no wander why they often refer to Kalymnos as “the climbing paradise”. Small and huge cliffs, fine smooth slabs, the most perfect overhanging tufas in the world, featured walls for beginners... it's all there! 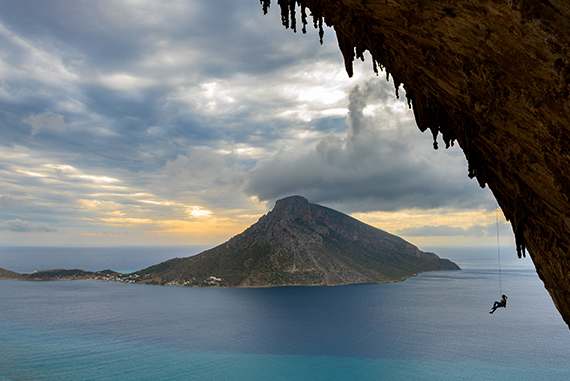 Before becoming so famous for rock climbing, the island had another record: Kalymnos was in fact the main sponge trade center of the mediterranean. The well known Kalimnian divers travelled the world to pursuit their fortune harvesting sponges, while the ones remaining on the island were making their living out of goat-farming and fishing. But it probably was in the 1940s, under the Italian occupancy, that someone first though about rock climbing. In fact rumors say that ”some crazy Italian soldiers" were spending their time climbing up and down the cliffs! 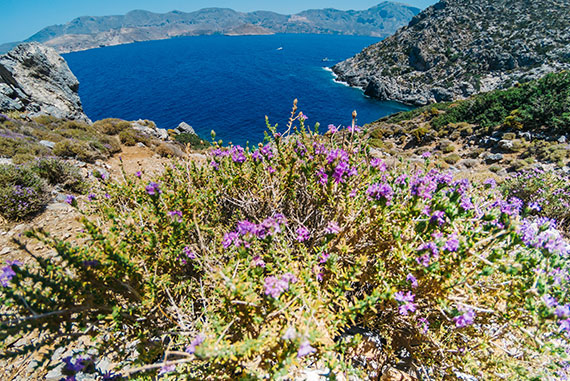 Years later, in 1996, the Italian Andrea di Bari arrived on the island for his summer holidays. Impressed by the excellent quality of the rock and the huge potential of the island, he returned in May 1997 with some climbing friends to put up some routes. Since then a large number of willing climbers and bolters have created the actual climber paradise, establishing more than 4.000 climbing routes on the islands of Kalymnos and Telendos. 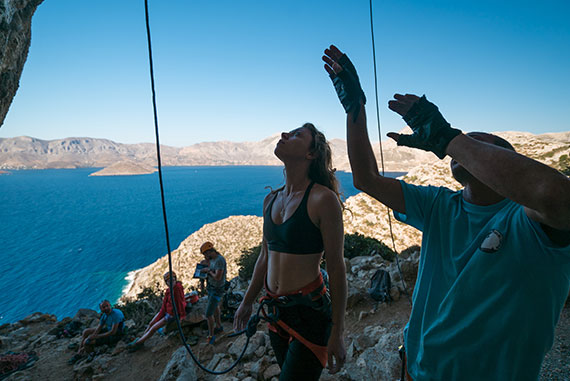 Naturally and culturally wise, we are in one of the most beautiful and well preserved archipelagos in the Mediterranean sea. Here it is still possible to find the authentic Greece: goats crossing the roads, hunters with dogs and rifles driving on scooter, fishermen smacking octopus on the rocks, old ladies selling thyme honey and olive oil at the side of the road, real tavernas where to have delicious greek specialties at a reasonable price, tiny monasteries all over the island and much more... 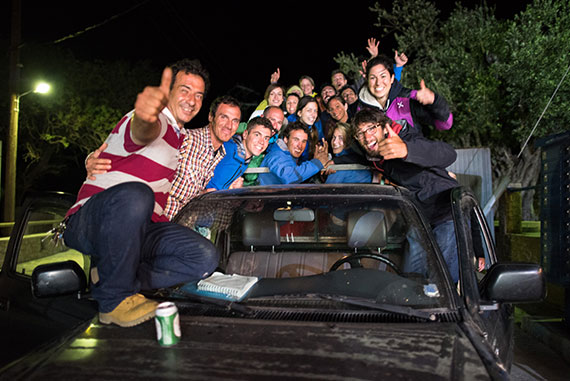 The course aims to touch some of the most beautiful and iconic spots on the island.
By boat we will also reach Telendos Island where we’ll get to climb on the crags of Eros, Pescatore and Irox. We will than sail and climb in the famous crags of Grande Grotta, Arhi, The Ghost Kitchen, Secret Garden…and the long approach to Sikati Cave will be avoided by dropping the anchor right at Sikati beach. Last, we will end the cruise by climbing the deep water solo lines in Vathy as well as some crazy routes starting at sea level and where the belayer will have to do it job floating on the dingy! 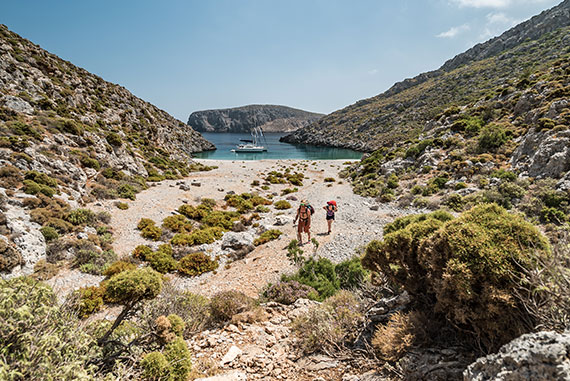 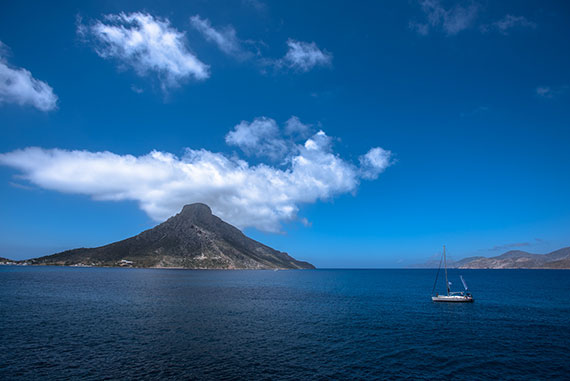 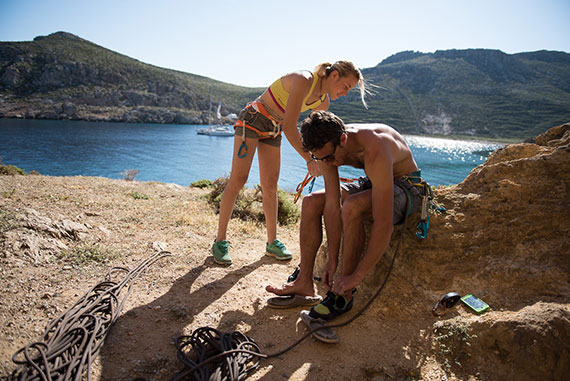 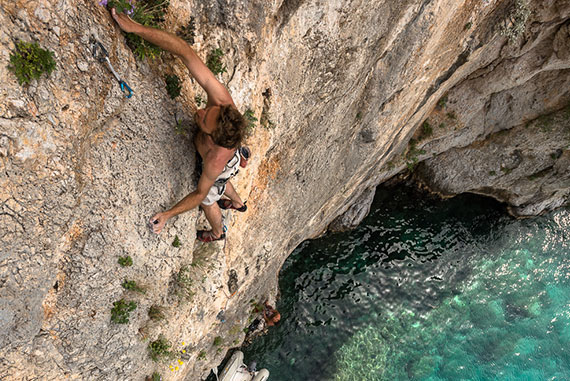 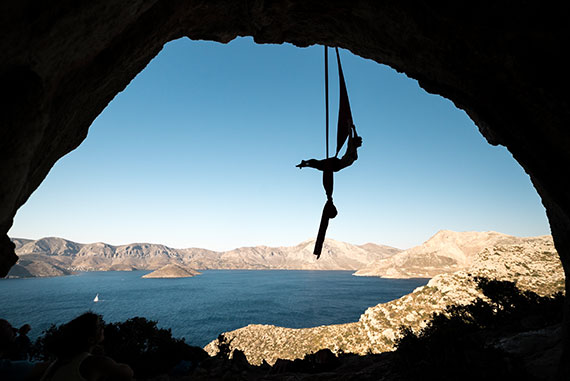 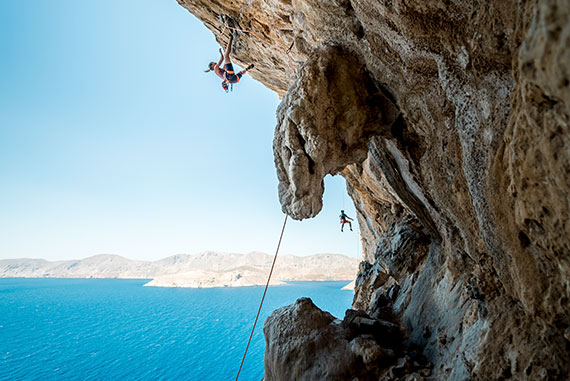 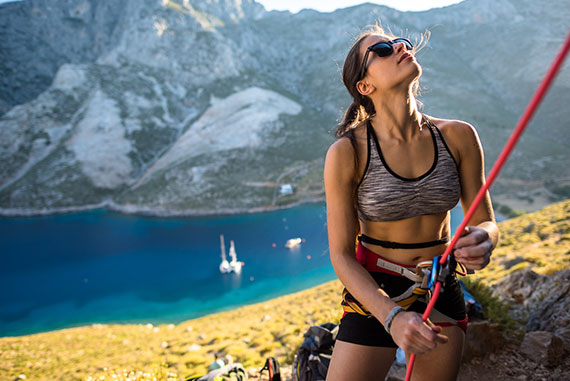 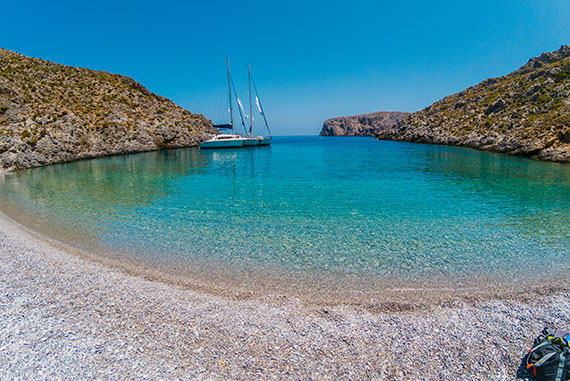 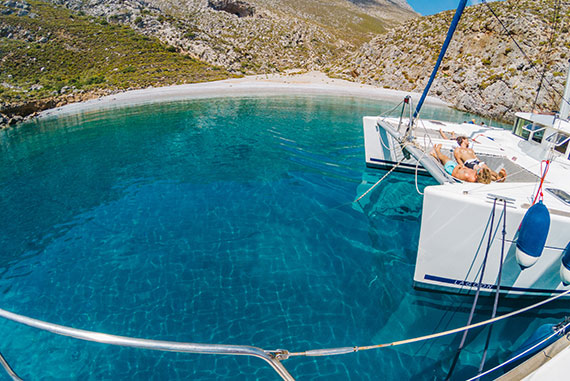 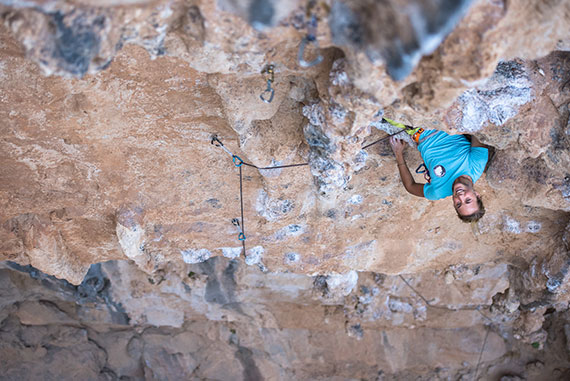 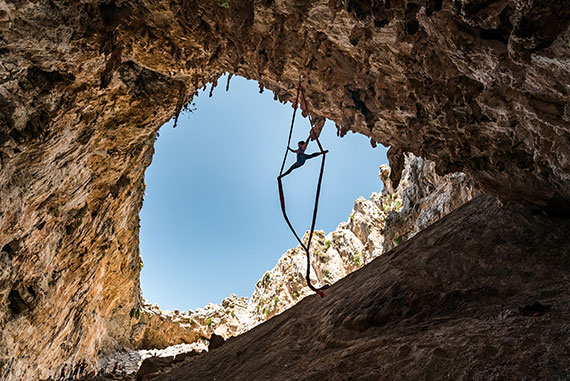 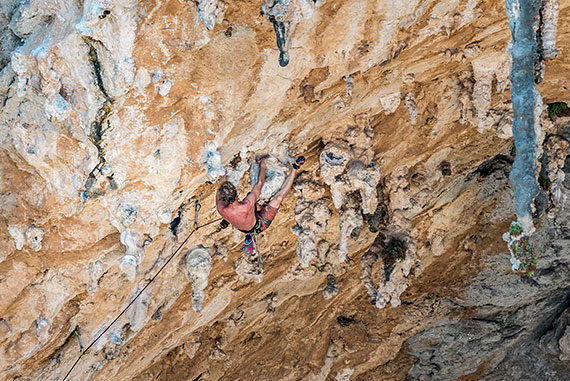 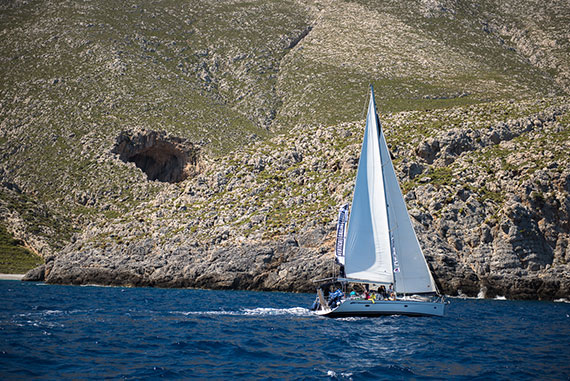 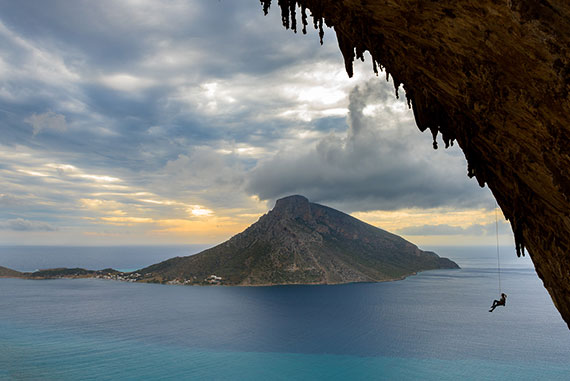 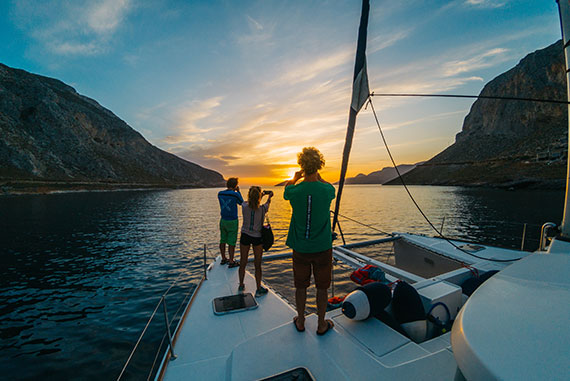 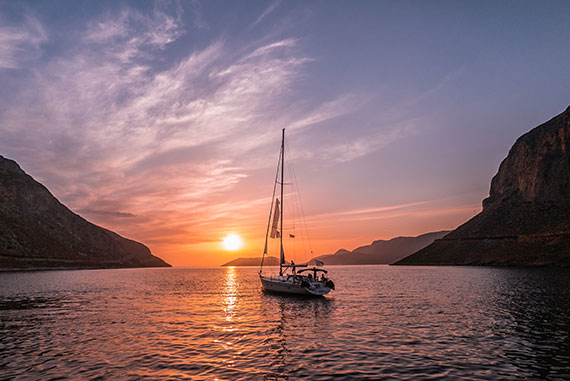 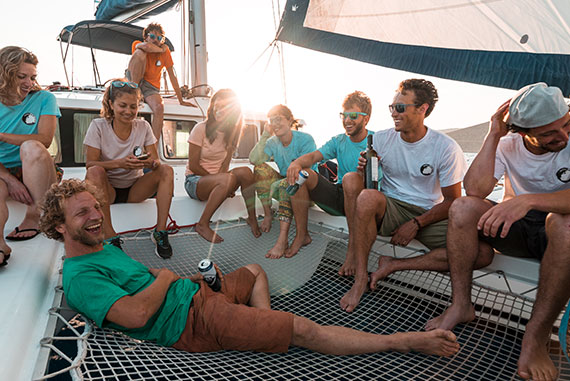 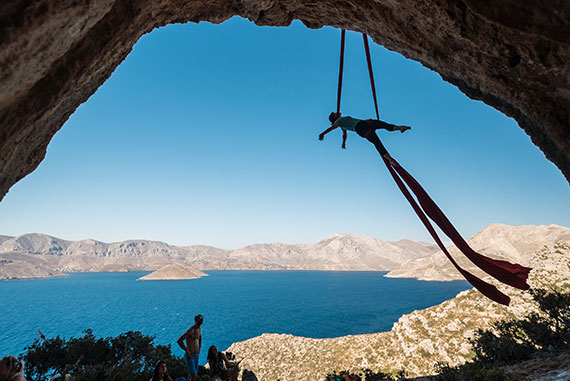 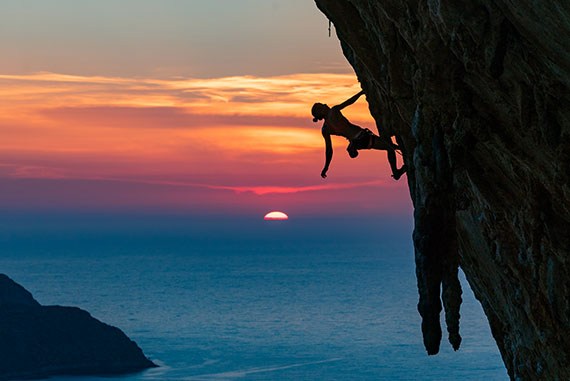 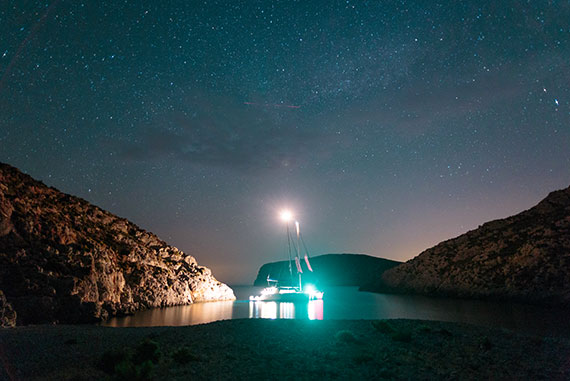